Thunder head coach Billy Donovan, whose contract with Oklahoma City expired after his team was eliminated in the playoffs this season, will not be returning to the club for the 2020/21 season, according to Adrian Wojnarowski of ESPN. The team issued a press release confirming that the two sides have mutually agreed to part ways. 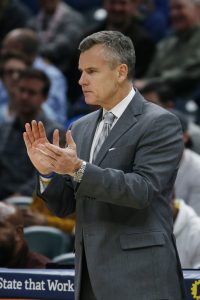 After Donovan and his representatives could not come to terms on a new deal with the Thunder, both sides opted to move on. As ESPN’s Royce Young tweets, the break-up is more about the two sides not aligning on a long-term fit than any strong desire to make a change.

“We had planned to sit down at the end of the season and discuss the best way to move forward for both of us,” general manager Sam Presti said in a statement on Donovan. “After those discussions, it became apparent that we couldn’t provide him the information on the future direction of the team over the next several seasons to give him the level of clarity that he understandably desires at this stage of his career. Therefore, we close this chapter and reflect fondly on all that he has given to the team, organization and community.”

The fact that the club’s front office, led by Presti, anticipates an eventual rebuild helped put a damper on contract talks, Wojnarowski tweets. The Oklahoma City roster features several veterans that the team could soon be looking to move for future assets, especially with league revenues suffering as the coronavirus pandemic continues, Woj notes (Twitter link).

When the Thunder traded All-Stars Paul George and Russell Westbrook in the summer of 2019, expectations for the team were lower than they had been at any point in Donovan’s tenure with the club, and there was a league-wide belief that an OKC rebuild was imminent.

However, Donovan and new additions Chris Paul and Shai Gilgeous-Alexander led the Thunder to a 44-28 record in 2019/20, good for the No. 5 seed in the Western Conference. The team eventually lost Game 7 in the first round of the playoffs to former Thunder MVP Westbrook and the Rockets.

Donovan sported a 243-157 (.608) record in his five seasons as Thunder head coach. The team made the postseason in each of those five years, though it only advanced beyond the first round once during that time, in 2016, prior to Kevin Durant‘s departure.

Donovan’s exit from Oklahoma City immediately makes him one of the more intriguing free agents on the head coaching market.

The Bulls, in the midst of finishing a first round of interviews with prospective candidates, are anticipated to be interested in Donovan’s services as a potential new head coach, according to Woj (Twitter link). The Sixers are also expected to pursue Donovan, per Sam Amick of The Athletic (Twitter link).