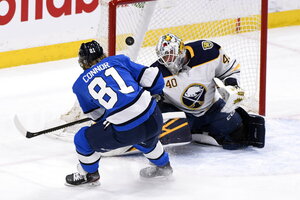 WINNIPEG, Manitoba (AP) — Forward Kyle Connor had two goals and an assist to lead the Winnipeg Jets to a 3-1 victory over the Buffalo Sabres on Tuesday night.

It was the first of a three-game homestand for the Jets, who have won four consecutive games in their own arena and are 18-4-3 at home.

Ristolainen pulled Buffalo to within 3-1 midway through the second when he took a bad-angle shot that went in off Hellebuyck’s left skate. Winger Kyle Okposo and center Johan Larsson were credited with assists.

With Ristolainen off for tripping, Connor had a power-play goal early in the second period to give Winnipeg a 3-0 lead. Left alone in front of Hutton, he converted a rebound of a shot by Patrik Laine. Blake Wheeler also assisted.

The Jets had taken a 2-0 lead into the second period, thanks to a short-handed goal at the 15:05 mark. With center Nick Shore off for slashing, Poolman tipped a perfect pass from Connor past Hutton. Andrew Copp had started the play in his own end and was awarded and assist.

Connor had opened the scoring at 13:59 of the first. He converted a perfect pass from Wheeler on a 2-on-1 rush.

The Sabres buzzed Hellebuyck in the third period, especially after pulling their goalie with more than two minutes left. But they could not get the puck past Hellebuyck.

Connor had a couple of chances to score his third in the final frame, but was foiled by Hutton.

NOTES: Jets defenseman Josh Morrissey returned to action after missing four games with an upper-body injury. … Forward Patrik Laine also returned after missing one game with a swollen left foot, the result of blocking a shot.