Duke freshman star Zion Williamson suffered a right knee injury in Wednesday’s game between the No. 1 Blue Devils and No. 8 North Carolina. The injury occurred 36 seconds into the game as Williamson—the presumptive number one pick in the upcoming 2019 NBA Draft—dribbled the basketball as Tar Heels forward Luke Maye defended him. The 18-year-old forward then appeared to lose his footing and fell to the floor. In visible pain, he then grabbed his injured knee.

As Williamson was on the floor, it was apparent from the television broadcast that his left Nike sneaker had torn apart. The tear appeared to have occurred when Williamson planted his foot while dribbling. Former President Barack Obama, who attended the game and sat in the front row, was shown on camera mouthing “his shoe broke.”

An injured Williamson returned to Duke’s locker room and was ruled out for the remainder of the contest. After the game, which Duke lost 88-72, Duke coach Mike Krzyzewski described Williamson’s injury as a “mild knee sprain.” He also assured reporters that Williamsons’ knee is stable. However, Krzyzewski offered no timetable on when Williamson is expected to return to action.

There are several potential legal implications of the injury and its relationship to a broken sneaker.

AN INJURY TO A FRESHMAN SUPERSTAR AND ITS IMPACT ON THE NBA’S ELIGIBILITY RULE, AMATEURISM AND “TURNING PRO”

Williamson’s injury is a painful reminder why the NBA and NBPA are expected to explore modifying Article X of the collective bargaining agreement. Article X instructs that for an American player to be draft eligible, he must be at least 19 years old and at least one NBA season must have elapsed since when he graduated from high school or, if he didn’t graduate, when he would have graduated. While the current CBA runs through the 2023-24 season (with a mutual opt-out clause after the 2022-23 season), Article X could be amended before then. More likely, it would be changed in a new CBA. The relevant change would be to allow players to “jump” from high school to the NBA. The NBA permitted amateur players to make that jump from 1976 to 2005. LeBron James, Kevin Garnett, Kobe Bryant, Tracy McGrady, Tyson Chandler and Al Jefferson are among those American players who skipped college altogether and excelled in the NBA.

If Williamson had suffered this same knee injury during an NBA game, he would have the security of guaranteed employment contract worth millions of dollars. Instead, as a college freshman, Williamson is an “amateur” whom Duke can only compensate up to the “grant-in-aid.” This term refers to the collective reimbursement value of tuition, fees, room, board, required course related books and other miscellaneous expenses reflecting the full cost of attendance.

Also, under NCAA amateurism rules, Williamson is barred from signing an endorsement deal that reflects his considerable marketability. Tickets to Duke games have soared in prices at least in due to the chance to watch Williamson play in person. Upon turning pro, Williamson will almost certainly sign multi-million-dollar endorsement deals.

Williamson, who has dominated his collegiate competition, likely had the requisite skill and talent to enter the NBA out of high school and play meaningful minutes in that rookie NBA season. His injury will remind both the NBA and NBPA of that point.

Williamson’s injury will also remind both himself and his family and advisors of the risk of playing in college. There is no doubt that part of Williamson will want to return to the court as soon as possible for the Blue Devils. This is particularly the case given that Duke has the number one men’s basketball team in the country and possess an excellent chance to win the NCAA title in April. Another part of Williamson will probably urge him to leave Duke immediately, declare for the NBA draft and begin training for his NBA career. The related logic would be it is better to be safe than sorry.

Krzyzewski’s post-game description of Williamson’s injury as a mild strain suggests that Williamson will recover. Knee injuries, however, can sometimes prove lasting and can make the knee vulnerable to re-injury.

In the unlikely event that Williamson’s injury is more serious than Krzyzewski implies, Williamson could explore the possibility of suing Nike. The sneaker Williamson wore stems from the 12-year sponsorship contract extension Duke and Nike signed in 2015. The agreement calls for Nike to “supply all 27 of the Blue Devils’ athletics teams with uniforms, footwear, apparel and equipment innovation through 2027.”

If Williamson’s injury leads to lasting or permanent impairment in his ability to excel as a basketball player, Williamson could argue that Nike is liable for manufacturing a defective sneaker that caused his injury.

Like other sneaker companies, Nike is legally obligated to market footwear that is of reasonable quality for its intended purpose. Article 2 of the Uniform Commercial Code, which has been adopted in North Carolina, obligates retailers to provide goods that are merchantable, meaning of ordinary quality. A sneaker that falls apart (and that had not been tampered with, or otherwise misused by its wearer) is clearly not merchantable.

The sneaker worn by Williamson was intended for use in competitive basketball games and for wear by basketball players, some of whom—like the 6’7, 284-pound Williamson—are very large persons who run at fast speeds and who quickly pivot their feet on the fly. Williamson will probably keep the broken sneaker as potential evidence (or, less litigiously, as a memento of a strange occurrence). There is also no shortage of eyewitnesses who attended the sold-out game and who could personally attest to witnessing the sneaker ripping apart. Former President Obama is one of them.

Product liability and personal injury lawsuits involving defective shoes are not completely rare, either. Last March a woman from Connecticut received a $120,000 settlement from a shoe company after a plastic heel twisted, causing her to fall and break her ankle. In 2003, a Florida court presided over a lawsuit brought by the parents of a boy who had suffered an infection to the bone and permanent heel damage. The injury occurred after he wore a Nike sneaker which allegedly contained a foreign metal object.

Assuming the injury damages Williamson’s prospects for an NBA career and for lucrative endorsement deals, Williamson’s potential damages against Nike would be massive. While there is no guarantee that Williamson will become an NBA star, he is expected to be a dynamic NBA player who will excite fans. In a trial, Williamson would retain expert witnesses who would insist that Williamson projects to earn hundreds of millions of dollars between NBA contracts and endorsement deals. Nike, of course, would depict such projections as wildly speculative and overly-optimistic.

Nike would be armed with several other legal defenses. First, Williamson would need to prove that his right knee injury was actually caused by his left sneaker falling apart. While it is logical to assume there is a connection between the injury and the sneaker, a court would need to be convinced through expert testimony. It is possible that the injury occurred independent of the sneaker.

Second, Nike would explore whether Williamson or a third-party, such as someone on Duke’s equipment staff, might have unintentionally tampered with the sneaker to make it less secure. Nike would also assert that such tampering was unforeseeable to the company. That said, it is difficult to imagine how a sneaker could be altered so that it would fall apart after being worn for at least several minutes (between Williamson’s pregame activities and the 36 seconds of the game).

Nike might also question the floor conditions at Cameron Indoor Stadium, where the game was played, and whether those conditions caused Williamson to slip. Perhaps the court was slippery due to unattended player sweat or surface condensation. However, it does not appear that other Duke and UNC players who played in the game slipped at a higher rate than normal. Also, the injury occurred at the beginning of the game, when the floor was likely in its best condition.

Such a defense would be vulnerable to challenge. In some instances, courts are willing to allow intended beneficiaries of a sale to sue a manufacturer even if those beneficiaries are not in a contractual relationship. This tends to occur when a person suffers a personal injury and it was foreseeable the person would be injured by the good. It was obviously anticipatable to Nike that Duke players would use the sneakers it provided the university. Therefore, Nike’s warranties related to the sneaker likely extended to Williamson. 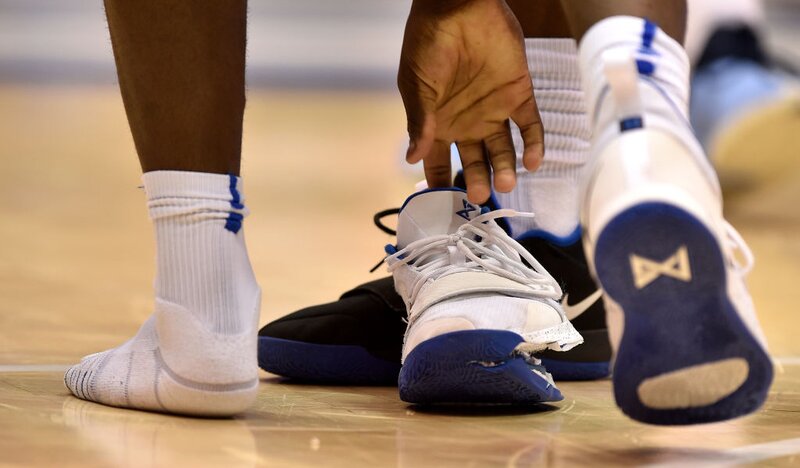 Duke could also have potential legal claims against Nike. The private university’s sponsorship agreement with Nike is not publicly available. However, several of Nike’s contracts with public universities are available online. One is with the University of Tennessee. The contract contemplates Nike providing “high quality” products to Tennessee. Assuming similar language exists in the Duke-Nike contract, Duke could argue Nike is in breach of the contract. The school would stress that a broken sneaker is of poor quality and that the broken sneaker at issue caused the university substantial harm when it injured a superstar player.

That said, the contract between Nike and Tennessee obligates the university to comply with a procedure for when player injuries arise while players wear Nike sneakers. Specifically, it requires the school to “promptly notify” Nike if a player suffers foot pain or discomfort after wearing a Nike sneaker and after the team’s physician verifies the injury. Nike, in turn, must “diligently seek to address such player’s foot pain or discomfort” while the school must make “best efforts” to encourage the injured player to “fully cooperate with Nike’s remedial efforts.” Those remedial efforts may include the player being examined by a podiatrist and Nike officials. Assuming this language is also found in Duke’s contract with Nike, the university would be obligated to follow the procedure.

Further, is it is extremely unlikely that Duke would attempt to sever its longstanding ties to Nike over one incident.

There are plenty of unknown variables at this time. Most importantly, we don’t know the severity of Williamson’s injury, other than information shared by Krzyzewski after the game. Hopefully, Williamson recovers speedily and fully. If so, the broken sneaker incident will be remembered as a bizarre, but ultimately inconsequential event in the career of one of basketball’s most exciting young players.

We also don’t know to what extent Williamson has purchased insurance that might impact compensate him if the injury is damaging. College players can purchase insurance. The Action Network’s Darren Rovell reports that, according to his source, Duke paid for Williamson to receive a loss of value insurance policy. It’s unclear how much of a loss this policy covers, though such policies typically contemplate losses ranging from $1 million to $10 million based on projected draft position. If Williamson’s policy is for around $10 million, it might not cover the magnitude of his loss, depending on the severity of his injury and his ability to recover from it.

Lastly, in the unlikely event that Williamson’s injury leads to potential litigation with Nike, don’t expect the parties to litigate for long. Nike would be inclined to quickly settle a lawsuit that is based on a broken Nike sneaker worn by a basketball star. In reality, the publicly-traded company has already suffered damage its brand. It’s hard to think of a worse apparel malfunction for Nike than for a player of Williamson’s prominence to fall after his Nike sneaker tore during a nationally televised game. Nike will be poised to end this story as soon as possible and would likely attempt to settle any legal claims long before they became public.

Michael McCann is SI’s legal analyst. He is also Associate Dean of the University of New Hampshire School of Law and editor and co-author of The Oxford Handbook of American Sports Law and Court Justice: The Inside Story of My Battle Against the NCAA.