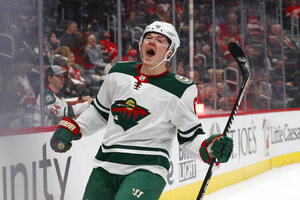 DETROIT (AP) — Defenseman Matt Dumba had two goals and an assist and the Minnesota Wild beat the Detroit Red Wings 7-1 on Thursday night.

Kevin Fiala had a goal and two assists, Ryan Hartman and Ryan Donato and had a goal and an assist each and Jordan Greenway and Eric Staal also scored for Minnesota, which is battling for the final playoff spot in the Western Conference. Mikko Koivu had two assists and Alex Stalock made 25 saves.

Anthony Mantha scored for Detroit, which owns the league’s worst record. Jimmy Howard stopped 12 shots before being replaced by Jonathan Bernier, who made seven saves. Howard is 0-18-2 since his last win on Oct. 29, has been pulled five times this season and has allowed nine goals on 33 shots in his last two games.

Hartman opened the scoring with a backhand tip-in that finished off a three-way passing play, with Koivu and Donato, off the rush 7:52 into the game. Donato put in Hartman’s rebound 27 seconds later, and Dumba scored on a shot from the point with 9:48 left in the opening period.

Mantha got his 14th goal, on a breakaway, 7:33 into the second period but Dumba’s power-play goal restored Minnesota’s three-goal lead with 9:30 left in the middle period. Greenway scored 2:35 later, which sent Howard to the bench in favor of Bernier. Fiala added his 18th goal with 1:44 remaining in the second.

Staal scored his 19th goal midway through the third.

NOTES: C Victor Rask was a healthy scratch for Minnesota. … C Sam Gagner made his debut with Detroit after being acquired from the Edmonton Oilers on Monday. … Red Wings D Filip Hronek returned after missing four games with a head injury.

Red Wings: At Ottawa on Saturday.