And then there were two.

On Thursday afternoon, the Dallas Cowboys made a surprising announcement that Jason Witten was returning to the team to play tight end for the 2019 season, meaning ESPN’s Monday Night Football booth is down to Joe Tessitore and Booger McFarland. Technically, the booth is down to one since McFarland does the games from a crane, but let’s not get sidetracked.

What will ESPN do now is the question of the day. Here is their offical PR statement: 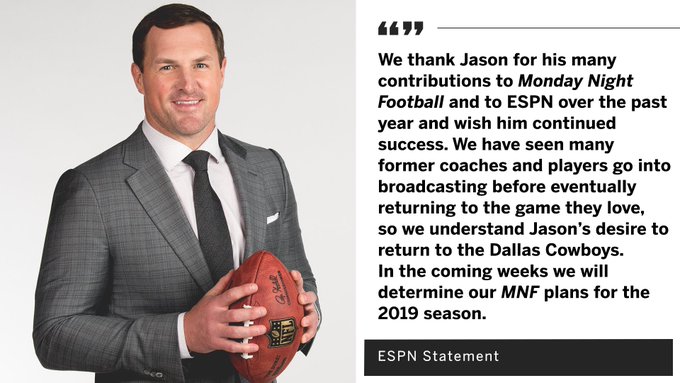 My guess is that the network will put the crane into retirement, get McFarland in the booth and go with a two-man crew. Witten was torched each and every week on social media for his performance, and this is a chance or ESPN to reset and see if Tessitore and McFarland have any chemistry.

With Tessitore, Witten and McFarland all calling NFL games on television for the first time in their careers last season, things felt forced and the trio never meshed. It didn’t help that the production for Monday Night Footballlast season was often a mess with constant shots of Tessitore and Witten in the booth and McFarland on his crane.

However, if ESPN insists on having two analysts join Tessitore—or if they would even consider reassigning McFarland and giving the booth a completely new look—here are five candidates for the gig.

1. Peyton Manning: Networks are in love with the idea of having the future NFL Hall of Fame quarterback calling games. Manning reportedly turned down multiple television deals last season. Will ESPN go back to him with a blank check? They already have an in with Manning, who does work for ESPN+.

2. Kurt Warner: Warner has called a handful of games over the years for NFL Network and does games on the radio. He’s very good in the booth and very likeable. He’s also a big name and a former quarterback—two things networks love.

3. Nate Burleson: He already has a daily gig with NFL Network’s Good Morning Football and does the CBS pregame show each Sunday, but he is a rising star in the business. Burleson opened a lot of eyes calling a couple of NFL Network games last season and generated a lot of positive feedback on social media. It would also give ESPN a chance to give the booth a younger feel.

4. Dan Orlovsky: Speaking of giving the booth a younger feel, ESPN loves Orlovsky and features him on several of their studio shows. He is all about X’s and O’s and has a knack for breaking down plays. He hasn’t called any NFL games, but ESPN has showed that isnt’t a requirement to get this job.

5. Tim Tebow: If ESPN wants to cause a splash and generate some buzz, nobody would do that more than Tebow. He’s already an ESPN employee, working as an analyst on the SEC Network.