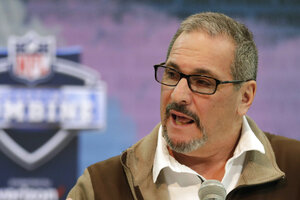 The New York Giants added versatility to their defense, taking Alabama safety Xavier McKinney with the fourth pick in the second round of the NFL draft on Friday night.

The pick allows new coach Joe Judge to return to his Alabama roots, where he mentored under Crimson Tide coach Nick Saban.

McKinney led Alabama with 95 tackles. He also can blitz and is willing to take on the run.

After releasing Antoine Bethea, the Giants had only two safeties returning who saw a lot of action last season, Jabrill Peppers and Julian Love.

The Giants have a compensatory pick at the end of the third round, No. 99 overall. The New York Jets have the Giants’ original third-rounder because of a trade for defensive tackle Leonard Williams.