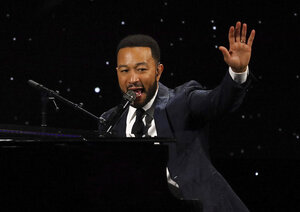 NEW YORK (AP) — One program the coronavirus hasn’t forced a screeching halt to is NBC’s “The Voice.”

John Legend, one of the four coaches on the Emmy-winning music series, says he and the others have pre-taped the show until the end of April.

“There were only three weeks of live shows planned and those were for May. So who knows what we’ll do? I don’t know if we’ll be able to do them without an audience. I haven’t spoken to the producers about what the plans are,” he told The Associated Press in an interview this week.

“And I think everybody’s playing things by ear because we don’t know where the world’s going to be in May. But if we can do those shows in May, that’d be great. Possibly without an audience, that would be understandable,” he added. “But, you know, if we can pull it off, then that would be great. We’ll see if that’s doable.”

The rapidly spreading coronavirus has forced a number of cancellations and postponements, including awards shows, concerts and the suspension of the NBA, MLB and NHL seasons. Some TV shows have taped without an audience, while others like Al Roker and Savannah Guthrie of the “Today” show and Jimmy Fallon have aired segments from home.

The coronavirus causes only mild or moderate symptoms such as fever and cough for most people but can be severe in some cases, especially older adults and people with existing health problems. People with mild illness recover in about two weeks, while those with more severe illness may need six weeks to recover.

“(Monday) we had a very highly-rated episode, obviously, because people are home and … watching shows like ‘The Voice,’” he said.

The Associated Press receives support for health and science coverage from the Howard Hughes Medical Institute’s Department of Science Education. The AP is solely responsible for all content.