With star rookie Luka Doncic held out of the last few regular season games due to injury, there’s seemingly not a lot on the line for the Dallas Mavericks outside of enjoying the time we have left with Dirk Nowitzki.

But, of course, there are still a handful of games left on the schedule, and the Mavs made it entertaining with a 129-127 overtime win over the Memphis Grizzlies on Sunday. Behind a career-high 19 points from Salah Mejri, Dallas picked up its third win in five games.

However, there are major implications for the win. Although both teams have been eliminated from the playoffs long ago, they’re fighting for a small edge in the draft lottery odds.

Dallas’ win pushes the team to 32 wins, which ties them with those very Grizzlies and Washington Wizards. Meanwhile, the New Orleans Pelicans are right on their tails at 33 wins.

With just one to two games left for each of the teams, there is a lot on the line for these teams that could finish with between the sixth and ninth worst records.

Why is draft lottery positioning so key to the Mavs?

All teams prefer to have higher chances at winning the lottery, but the Mavericks are paying extra attention to where their pick might fall. That’s because they owe their first-rounder to the Atlanta Hawks from the Doncic-Trae Young draft day trade — unless it falls within the top five.

Because the Mavs can have the sixth-worst record at best, they’ll need to win one of the top four picks in the lottery to keep their own pick this year.

Considering they’ll likely have a much better record next season with a year of experience for Doncic, a healthy Kristaps Porzingis and a potential top-four lottery pick, the Mavericks would much prefer to convey their first-rounder next season.

How likely are the Mavericks to keep their pick?

Best-case scenario, the Mavericks will be in the sixth position, which would give them a 37.2 percent chance at keeping their pick. However, if they win out, they could end up ninth and with a 20.2 percent chance.

Teams have won the lottery with smaller odds than the Mavs may have, but every point matters with the new flattened lottery odds. Things can get even more complicated if multiple teams end up with the same record; in that case, the tied teams’ chances will be averaged together. 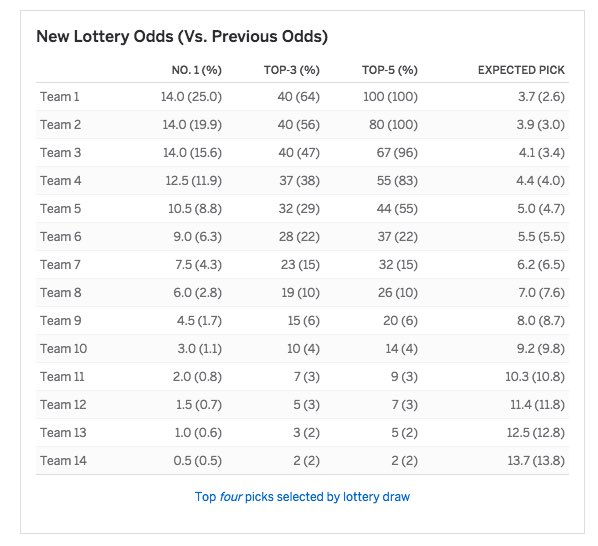 Dallas wraps up its season at home against the Phoenix Suns — where it will be favored — before visiting the San Antonio Spurs. Meanwhile, other teams have harder opponents, so the Mavericks could easily be in an even tougher spot soon.

It’s easy to dream on a Big Three of Luka, Kristaps and Zion Williamson, but the chances of that potential core seem to be fading with time. Sunday’s win certainly puts a wrench into those plans, but there’s still a chance to improve the team’s chances before the May 14 lottery.