The MLB playoffs frenzy turns up the heat Thursday with five (count ’em, five) elimination games. We’ve already said goodbye to the Twins, Blue Jays and Indians, and either the White Sox or A’s will be kicked off the American League island. In the National League, the Reds, Cubs, Padres and Brewers need a win to stay alive and force a winner-take-all Game 3.

Here’s your guide to every game, stats to know while you watch, a hot take sure to get your blood boiling and a look back at the best from Wednesday’s action.

A trendy pick when they qualified for the postseason field, the Reds already face elimination — and they face a rookie who, despite having just six big league starts, may well be up to the task. Anderson, who held the Yankees to one hit over six innings in his Aug. 26 debut, posted a 1.95 ERA, .172 opponents’ batting average and 41 strikeouts (with 14 walks) in 32⅓ innings. After being shut out in a 13-inning loss in Game 1, Cincinnati needs to find a way to score. The Reds stranded eight runners over the last three innings Wednesday. The Reds have gone 24 consecutive seasons without winning a playoff series (last win: 1995 NLDS vs Dodgers), which is the longest active drought in MLB. If they lose Thursday, you can make it 25.

What’s next for eliminated teams?

Is your squad already out of the MLB postseason? Here’s what’s on the offseason to-do list.

The upstart Marlins look to keep their unexpected run going and push the franchise to 7-for-7 in playoff series. Miami turns to rookie right-hander Sanchez, who was fabulous in his first five starts (1.69 ERA, 0.91 WHIP) but struggled in his past two (11.57 ERA, 2.57 WHIP). The Cubs counter with Darvish, who is an NL Cy Young contender but has struggled in six postseason starts (5.81 ERA, eight HRs allowed). A key question is whether Marlins outfielder Starling Marte, whose left hand was hit by a pitch Wednesday, will be able to play.

The A’s have lost a record nine straight winner-take-all games, and they may not have the services of closer Liam Hendriks, who threw 49 pitches in Game 2 looking for a six-out save but needed help to finish things off. Neither manager committed to a Game 3 starter Wednesday; chances are it’ll be all hands on deck for both teams, especially with the next round not beginning until Monday.

The Padres stirred up a lot of excitement this season, but they were dealt a rough hand with their two top starters — Mike Clevinger and Dinelson Lamet — missing the wild-card series. Now San Diego needs a win to keep its season alive and faces seasoned playoff veteran Wainwright, who has a 2.81 ERA over 27 postseason appearances (14 starts).

The banged-up Brewers hung tough in Game 1 but came up short. Now it’s do or die for Milwaukee, which at least has its top starter on the mound in Woodruff. With Kershaw on the hill, the Dodgers certainly want to take care of business.

If you watch only one game today it should be … 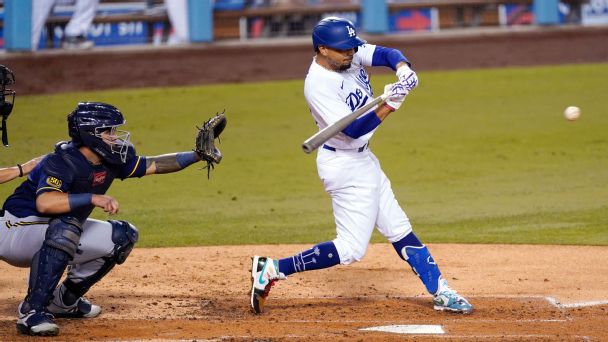 Watch the most exciting opening round in MLB history on ESPN and ABC.

Every game Thursday is an elimination game, so you really can’t go wrong. But the one that has our interest is the nightcap between the Dodgers and Brewers, primarily to see Clayton Kershaw. The last image we saw of Kershaw in the postseason was one of the lasting images of the 2019 playoffs, the Dodgers lefty — pitching in relief of the decisive Game 5 of the NLDS against the Nationals — giving up back-to-back home runs to Anthony Rendon and Juan Soto in the eighth inning, allowing Washington to tie a game it would win in 10. It was the latest unfulfilling moment for the Dodgers and their ace.

Fair or not, the career résumé of Kershaw, perhaps his generation’s greatest pitcher, will have a hole in it until he and the Dodgers win a World Series. The 32-year-old had his best season since 2016 and should be fresher than he has been in past postseasons given the shortened 2020 campaign. The powerhouse Dodgers might be able to win it all even if Kershaw isn’t on top of his game, but seeing L.A.’s ace play an integral role in earning his ring is a storyline to root for. — Steve Richards

Updated odds for every series

Hot take of the day

Watch for a confident Marlins team to push the envelope against Yu Darvish as they attempt to sweep the Cubs. Darvish can be deliberate to the plate, and if the Marlins get runners on, they will try to force the issue. Besides the benefit of taking an extra base, their hope is to knock Darvish off his rhythm, which has been solid from Day 1 this year.

With shadows wreaking havoc on hitters in the final couple of innings in Wednesday’s Game 1, whoever is leading after seven may have a big advantage in Game 2. If Darvish is still pitching, it probably means the Marlins were unsuccessful in throwing him off his game. — Jesse Rogers

Stat of the day

A big reason the Marlins have never lost a playoff series is that they almost always get off to a good start. The Fish improved their Game 1 record to 6-1 with Wednesday’s win, the best in postseason history.

The Marlins scored all five of their runs Wednesday in the seventh inning. The last time they scored five or more runs in an inning of a playoff game also came against the Cubs at Wrigley Field — Oct. 14, 2003, when they scored eight runs in the eighth inning that became infamous for the Steve Bartman incident.

For ESPN+ MLB postseason betting info, check out our picks and best bets

The heavy World Series favorite made their opening statement, and while the Dodgers’ 4-2 win over the Brewers wasn’t emphatic, it got the job done. Mookie Betts set the tone with a leadoff double in the first, and four Brent Suter walks later, L.A. had a 2-0 lead it wouldn’t relinquish. … The Yankees and Indians played a wild, back-and-forth game that ended more than six hours after its scheduled start time because of weather delays and general mayhem. When everything finally settled down, New York had a 10-9 win and a series sweep. … The Twins extended the most agonizing streak in sports by losing their 18th consecutive playoff game, which knocked them out to boot. Houston’s 3-1 victory puts the Astros, aka Public Enemy No. 1, into the division series against either the A’s or White Sox, while Minnesota is left to lament a pair of games in which it had just seven hits and scored just two runs. … The A’s forced a deciding Game 3 by beating the White Sox 5-3 behind starter Chris Bassitt (one run over seven innings). … The Rays moved on by jumping all over Toronto ace Hyun-Jin Ryu in an 8-2 rout of the Blue Jays. Tampa dispatched of Ryu in the second inning, when Mike Zunino hit a two-run homer and Hunter Renfroe delivered the KO with a grand slam. … Freddie Freeman broke a scoreless tie with a walk-off single in the 13th inning as the Braves beat the Reds 1-0 and spoiled a great outing by Cincinnati’s Trevor Bauer (7⅔ scoreless innings, 12 strikeouts, no walks). … The Cardinals got to Padres starter Chris Paddack, who allowed six runs and didn’t get out of the third inning, as St. Louis beat San Diego 7-4. The Cardinals are 10-1 all time in the postseason against the Padres.