After a fifth straight loss, San Antonio is in real danger of missing out on the postseason. 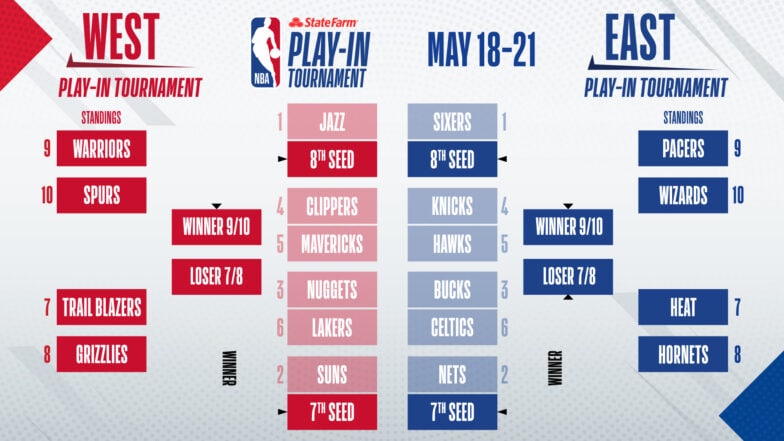 Forty-seven seconds. That’s the total time this season the Spurs have led the Jazz in three games (144 minutes).

Hard to win when you’re down for 99.46% of the available game time, and Wednesday’s result matched the other two: Spurs loss. Just a season after missing out on the postseason for the first time in 22 years — another bubble loss by either Memphis or Portland would’ve left San Antonio in the Play-In Tournament on percentages — the Spurs’ ship be sinking.

Loss No. 5 in a row has left them just 1 1/2 games up on the quickly climbing Pelicans, and there’s no question the general thirst for MAWR ZION makes New Orleans’ potential Play-In entry enticing. With Golden State off and Memphis sneaking ahead into 8th after beating the Wolves, the Warriors must start considering the likelihood of gameplanning for the second-year standout setting scoring efficiency records, rather than a Spurs team on the seasonal downslope.

Across the conference spectrum, the biggest heartbreak came in Milwaukee, where the ascendant Wizards nearly moved up to 9th after Indiana took an 11-point loss that belied the beatdown. With 2.5 seconds to go, Jrue Holiday threw a too-casual pass to advance upcourt; Russell Westbrook intercepted, dished ahead to Garrison Mathews and an in-stride heave hit glass, side rim and the hardwood. Breath was held in Washington for every moment it took to cross those 52 feet.

A 42-pointer from Bradley Beal and (yet) another triple-double from Westbrook went for naught — this time. Given the suddenly simmering situation in Indiana, we could see the Wizards steal homecourt in their likely Play-In pairing.

The Hawks are quickly solidifying their hold on the East’s No. 5 slot, and Wednesday’s dominant win over the league-leading Suns will only serve to bolster their confidence. A 38-15 fourth quarter showing — Atlanta didn’t give up a field goal for the first 9:27 of the final period — put things to bed. They visit the slumping Pacers on Thursday (8 ET; NBA League Pass) with a chance to stretch further still.

Winning with Miami off, the Celtics took a half-game step forward, out of the Play-In spots on the strength of a tiebreaker. As they close out with four of their final six on the away from the TD Garden, there’s a chance to head off the Bulls on Friday (7:30 ET; ESPN).

Dropped back into the Play-In places after the Celtics’ near-40-point beatdown of Orlando, the Heat travel to Boston for a pair of games this week that could decide who sits at home watching the Play-In and who spends the week on edge.

After a critical win over the Pistons on Tuesday, the Hornets found themselves another half-game up on the ninth-place Pacers after Indiana’s deflating loss to the Kings. The Bulls, Magic and Pelicans are on deck — a chance for the Hornets to solidify their standing, or even try to close the 2 1/2-game gap on Miami.

The Pacers took a rough loss at the hands of the Kings, with Marvin Bagley III popping off for near career-highs. The losses are up to seven in the last 10 games and four of the last five, and it doesn’t get any easier with Atlanta on the second half of this back-to-back (8 ET, NBA League Pass). Six of the Pacers’ seven remaining games are against teams battling for playoff or Play-In positioning.

A tough loss for the Wizards, who nearly knocked off one of the East’s top teams on Wednesday. Though their margin closed to three games over the Raptors for the 10th seed, they’ll have a chance to stretch it head-to-head on Thursday (7:30 ET, NBA League Pass).

Gifted a half-game on the off night, the Raptors have a chance to shrink the gap to 10th down to just two games in a head-to-head matchup with the Wizards on the second half of a back-to-back (7:30 ET, NBA League Pass). A loss stretches it to four, which is pushing it with five left after that.

The Bulls visit the Charlotte Hornets on Thursday (7 ET, NBA League Pass) in a game with plenty of Play-In ramifications for both teams. Time runs short, and a loss here probably does them in given tough competition the rest of the way.

The Mavericks clinched a Play-In berth at minimum on Tuesday, and their nationally televised matchup with Brooklyn on Thursday (7:30 ET, TNT) will provide a stiff test as they attempt to earn that extra week of rest.

LeBron James will reportedly miss the next two games because of his ankle injury, the first of which is a Staples Center special against the LA Clippers on Thursday (10 ET, TNT). The second is against the Portland Trail Blazers on Friday (10 ET, ESPN) with a potential flip-flop on deck.

It was a wire-to-wire win for the Blazers in Cleveland, and know they’re set to return home for a LeBron-less Lakers team on Friday (10 ET, ESPN). They’ve won five of their last six games, and could boost themselves past L.A. with a win.

Ja Morant and the Grizzlies won a thriller against the improving Timberwolves as he and Minnesota rookie Anthony Edwards put on a scoring show. The Grizzlies’ win is a good start to a key three-game road trip that continues Thursday in Detroit (8 ET, NBA League Pass) and wraps up Saturday in Toronto. How Memphis fares away from home could go a long way in determining their bid for a Play-In berth.

Golden State dropped a half-game behind the Grizzlies on the off day, but now stand to play six straight at home to close out the season. Potentially shaving an elimination game off the schedule looms large, starting with the Thunder and their extended slump on Thursday (10 ET, NBA League Pass).

Back-to-back losses to the Jazz — building on three losses prior — have shrunk the Spurs’ margin over the Pelicans to just 1 1/2 games. They’re back in action on Friday in Sacramento (10 ET, NBA League Pass) in a game that suddenly has more direct implications on the 10th seed than perhaps the Spurs anticipated.

New Orleans, after a career performance from Lonzo Ball helped close the gap, picked up another half-game with the Spurs’ loss to Utah. A tough matchup with the East-leading Sixers looms Friday (7 ET, NBA League Pass), and the Pelicans will likely have to do it without Brandon Ingram, who left in the third quarter of the win against Golden State on Tuesday with an ankle sprain and is expected to miss the next game.

A win over the Pacers on Wednesday has pushed the Kings’ streak to four straight and seven of their last 10, which suddenly puts a premium on Friday’s head-to-head with the Spurs. Add a victory at that point and things get interesting fast.