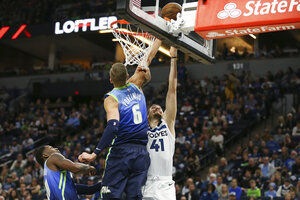 MINNEAPOLIS (AP) — Kristaps Porzingis had a season-high 38 points and grabbed 13 rebounds, Seth Curry scored 27 and the Dallas Mavericks rolled to a 111-91 victory over the Minnesota Timberwolves on Sunday afternoon with Luka Doncic sitting out with a left thumb sprain.

Porzingis scored 22 points in the first half as Dallas led by 20 points and never looked back. Tim Hardaway Jr. added 19 points as the Mavericks won for the third time in four games.

Doncic was declared out after being hampered by the thumb sprain in Friday’s loss at Miami. Dallas coach Rick Carlisle was unsure if the All-Star would be available Monday in Chicago.

D’Angelo Russell had 16 points, nine rebounds and seven assists, but Minnesota lost for the 20th time in 22 games.

The Timberwolves missed 10 of their first 11 shots, while Porzingis got started early. He scored 10 of the Mavericks’ first 19 points and had three blocks in the first half.

Offense hasn’t been the issue during Minnesota’s decline, but the Wolves had trouble Sunday. Minnesota didn’t score the first 3:20 of the second quarter and went 3:37 to start the second half without a point.

The Mavericks have gotten used to playing without Doncic, who returned to play five games after missing the previous seven with a sprained right ankle.

Porzingis has picked up the slack. Sunday marked his third straight game with at least 20 points and 10 rebounds and he’s done so five of the past six games.

The Wolves overhauled their roster at the deadline and have looked like a team still learning about each other. Adding to the woes, Karl-Anthony Towns missed his fifth straight game with a left wrist injury.

Malik Beasley scored 14 points but shot 5 of 15 from the field. Juancho Hernangomez, who arrived with Beasley in a trade from Denver, had 12 points and 12 rebounds for his third double-double in nine games for Minnesota.

Mavericks: Curry was 3 of 7 from 3-point territory. He started the day second in NBA history in 3-point percentage at 44.2%, behind only Steve Kerr. … Porzingis tied a season high with six 3-pointers made. … Dallas was also without Jalen Brunson (right shoulder sprain), Willie Cauley-Stein (personal reasons) and Dwight Powell (right Achilles tendon surgery). Carlisle said Cauley-Stein will rejoin the team in Chicago.

Timberwolves: Naz Reid grabbed a season-best 12 rebounds but narrowly missed his first double-double with nine points. … Minnesota waived Allen Crabbe, who had been away from the team for personal reasons, on Saturday. Crabbe was acquired in January trade that sent Treveon Graham and Jeff Teague to Atlanta. Crabbe played in nine games for Minnesota, averaging 3.2 points per game. … The Wolves had gone 24 straight games scoring at least 100 points.

Mavericks: Play the second game of the back-to-back Monday in Chicago.