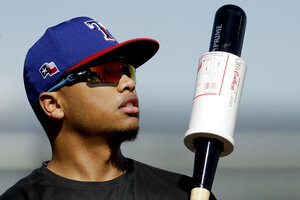 SURPRISE, Ariz. (AP) — Texas Rangers outfielder Willie Calhoun was hit in the mouth by a fastball Sunday and taken to a hospital.

The left-handed hitting Calhoun crumbled after being struck in the jaw by a fastball from Los Angeles Dodgers lefty Julio Urias in the first inning of a spring training game.

Calhoun fell on his back, put his hands over his face and was eventually carried off on a cart. The Rangers said he was taken to a hospital.

A fourth-round pick by the Dodgers in 2015, Calhoun was acquired by Texas in a trade for Yu Darvish in 2017 and established himself in the Rangers’ lineup last year. The 25-year-old set career bests with 21 homers, a .269 average and an .848 OPS in 83 games.