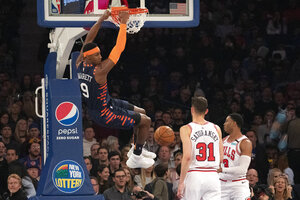 NEW YORK (AP) — With 20 games remaining in another lost season, there’s little for the New York Knicks to look forward to except the development of some young players.

Some of them played key roles Saturday as the Knicks snapped a six-game losing streak.

Reserve second-year player Mitchell Robinson had a career-high 23 points and grabbed 10 rebounds, 2019 first-round pick RJ Barrett scored 17 of his 19 points in the first half, and the Knicks beat the Chicago Bulls 125-115.

“We wanted to approach today like it’s a new day,” interim coach Mike Miller said. “Let’s go out and let’s make winning plays through the game.”

Buried at the end of the bench for much of the season, 2018 first-round pick Kevin Knox II also gave the Knicks a spark off the bench with his hustle play. He finished with 12 points and six rebounds for a Knicks team that had not won since Feb. 8 at Detroit.

Robinson, who at times has been plagued with foul trouble, credits his improvement to being more in control nowadays.

“Last year I was kind of wild. I wasn’t able to stable,” he said. “Now I see the game a little bit clearer, and make easier passes and work the game.”

His presence in the paint was needed Saturday, especially with 34-year-old starting center Taj Gibson returning after missing his last game due to back spasms.

“Taj is old. We’ve got to give my guy a break and step our game up,” Robinson quipped. “We are younger, way younger. So we really got to look out for him too. So we have to step our game up.”

Julius Randle added 22 points and 10 boards, while Gibson had 17 points and eight rebounds.

“His energy is consistent, night in and night out. Obviously, he’s getting better at playing without fouling,” Randle said of Robinson. “His energy as far as consistently running the floor and being a big threat on the screen-and-rolls and then his offensive rebounding has been amazing.”

Zach LaVine scored 26 points and Coby White chipped in 22 off the bench for the Bulls, who have lost their last two games and 10 of 11.

“How we arrive here? There’s a lot of different factors. I don’t think some people play it up to par. I think we did the right things game to game,” said LaVine, who said he tweaked his left quad during the pregame warmups.

“We fight but we obviously don’t get the end result that we need. Something (has) got to change,” he added. “You got to do something to get those wins and stop stockpiling (the) losses. I think there’s a lot of things you got to take into consideration. You got to look at it in the offseason.”

New York led by as many as 17 points early in the third quarter before Chicago cut the lead to two to start fourth quarter.

Thaddeus Young put the Bulls up 51-50 with 3:43 left in first half before the Knicks went on 16-3 run, scoring nine straight to close out the second period. Barrett shot 7 for 8 from the field and finished 17 points in the first half.

Bulls: Wendell Carter Jr., who was out since Jan. 6 due to a high ankle sprain, returned to the lineup. The 20-year-old started at center and finished with six points in 18 minutes. …. Reserve forward Denzel Valentine returned to action after missing seven consecutive game because of a left hamstring injury.

Knicks: Frank Ntilikina played for the first time after missing his last three games due to a sore groin. He had four points and four assists in 17 minutes. … Dennis Smith Jr. did not play after suffering a concussion Thursday night in Philadelphia. He will be held out of the next two games.

Knicks: Continue their five-game homestand by hosting the Houston Rockets on Monday night.