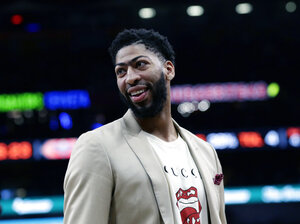 The Latest on NBA trades (all times Eastern):

A person familiar with the negotiations says Nik Stauskas and Wade Baldwin are on the move yet again, this time going from the Houston Rockets to the Indiana Pacers.

The deal was done largely to get Houston under the luxury tax threshold, according to the person who spoke Thursday to The Associated Press on condition of anonymity because it is pending league approval. ESPN first reported the trade.

It has been an eventful stretch for Stauskas and Baldwin, who started the week with Portland, then were traded to Cleveland, then Houston and now Indiana. And it remains unclear if the Pacers will keep them, meaning more moves for them are possible.

A person familiar with the situation says the Pelicans have agreed to trade forward Nikola Mirotic to Milwaukee as part of a three-team deal that sends the Bucks’ Jason Smith and Detroit’s Stanley Johnson to New Orleans.

The person spoke to The Associated Press on condition of anonymity because the deal has not been announced.

The 6-foot-10 Mirotic, an adept 3-point shooter, was acquired by New Orleans from Chicago last season and was an instrumental part of the club rallying to make the playoffs and advance to the second round after the season-ending injury to DeMarcus Cousins.

This season, Mirotic has played in just 32 of New Orleans’ 55 games because of injuries, but has averaged 16.7 points and 8.3 rebounds.

A person familiar with the negotiations says the Philadelphia 76ers are adding James Ennis from the Houston Rockets in exchange for draft considerations.

The person spoke on condition of anonymity pending the NBA trade call to complete the deal. Philadelphia will become the sixth club for the well-traveled Ennis, who averaged 7.4 points for the Rockets this season.

Ennis has also played for Miami, Memphis, Houston and New Orleans. He’s a career 36 percent shooter from 3-point range and will add to Philadelphia’s bench depth.

Only a few hours remain to determine if the Anthony Davis saga ends for this season or lingers into the summer.

The NBA trade deadline is Thursday at 3 p.m. EST, and Davis is still seeking a trade from the New Orleans Pelicans. If the team doesn’t deal him by then, it would have to wait until the offseason to part with its All-Star forward.

Two of the teams believed to be interested in Davis, the Lakers and Celtics, play Thursday night in Boston.

A few moves were made Wednesday, with some teams adding talent for playoff pushes, and others simply looking to trim their future salary obligations.

A decorated free agent class led by Kevin Durant, Kyrie Irving and Kawhi Leonard awaits in July, so more teams could use the final hours of the deadline searching for moves that could help them afford one of those star players.