PHILADELPHIA - SEPTEMBER 20: Football fans stream past people protesting the NFL re-instatement and Eagles' sigining of convicted felon Michael Vick of the Philadelphia Eagles before a game against the New Orleans Saints at Lincoln Financial Field on September 20, 2009 in Philadelphia, Pennsylvania. (Photo by Jeff Zelevansky/Getty Images) 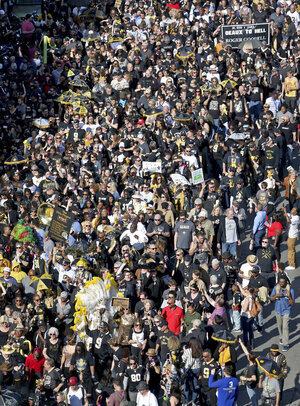 NEW ORLEANS (AP) — Thousands of people attended the city of New Orleans’ protest parties on Super Bowl Sunday, and many of those who attended a special fundraiser contributed more than $57,000 for a foundation that works to improve the community.

A blown referee call in the NFC championship that many believe cost the Saints a chance to play for the Super Bowl title, and angry Saints fans organized a number of protest parties around the city Feb. 4, the day the game was played in Atlanta.

The Boycott Bowl featured more than 15 musical acts. Boycott Bowl officials on Friday presented the NORD Foundation with a check for $57,404.36 from the street festival.

Mayor LaToya Cantrell said the money raised shows how resilient the city’s residents are when they are knocked down.