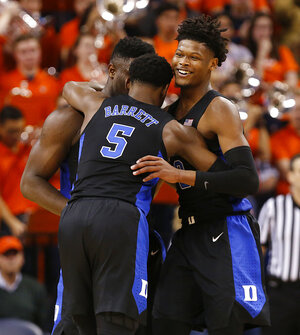 The Blue Devils beat third-ranked Virginia 81-71 on Saturday night in a matchup of league heavyweights ahead of Monday’s new AP Top 25 poll. That secured a regular-season sweep of the reigning league champion Cavaliers.

Now the Blue Devils (21-2, 9-1 ACC) hold the head-to-head tiebreaker with the Cavaliers (20-2, 8-2) entering the final month of the schedule, which will make it tougher for Virginia to catch them in the standings. Virginia’s two losses to Duke mean the Cavaliers have lost more games against league opponents this year compared with its 20-1 run during last year’s regular-season and tournament titles.

Maybe more importantly, Duke’s torrid 3-point shooting showed how difficult it will be for any team — inside or outside the league — to stop the Blue Devils if their outside shot is falling.

Duke entered Saturday shooting just 30.8 percent from behind the arc, ranking 13th among the ACC’s 15 teams. That is on pace to finish as by far the worst mark in program history, and Duke had made 14 of 50 3s (28 percent) in the two games entering its trip to Charlottesville.

But with the Cavaliers working to clog the lane, Duke made 13 of 21 tries against a defense that ranks No. 3 in KenPom’s adjusted defensive efficiency (86.4 points allowed per 100 possessions).

If the Blue Devils are able to stretch defenses that well going forward, there will be even more driving lanes for freshman stars RJ Barrett and Zion Williamson in a schedule that still includes Tuesday’s trip to No. 16 Louisville as well as two matchups with No. 8 North Carolina.

“They have some special players in what they can do,” Virginia coach Tony Bennett said afterward. “It’s not just if you’re really tight on them, they certainly can beat you off the dribble and get on the glass, but they weren’t missing many.”

Duke isn’t alone atop the ACC. Rival UNC is there, too.

That put the Tar Heels at 9-1 in the ACC for the first time in 16 seasons under Hall of Fame coach Roy Williams entering another marquee game: Monday’s visit from Virginia.

Top-ranked Tennessee is still rolling along.

The Volunteers (22-1, 10-0 Southeastern Conference) won two games by a dozen points this week, beating Missouri and Florida to push their school-record winning streak to 18 games. It’s the nation’s longest active streak and now stands as the longest for coach Rick Barnes in a career spanning more than three decades.

“The fact of the matter is I just say, ‘Let’s win the next one, let’s try to win the next game,’ because wins are hard to come by at any point in time,” Volunteers coach Rick Barnes said. “The fact that they’ve done what they’ve done, they get the credit for it, but I’ve never thought about win streaks or any of that.”

Seventh-ranked Michigan (22-2, 11-2 Big Ten) beat No. 19 Wisconsin on Saturday, avenging its first loss this season. It helped that the Wolverines had a better day against Badgers forward Ethan Happ in Round 2.

Happ, a preseason Associated Press All-American, had 26 points, 10 rebounds and seven assists with just one turnover in the first meeting . The 6-foot-10 senior still had a double-double (18 points, 11 rebounds) in the rematch, but he had just one assists with five of Wisconsin’s seven turnovers.

Fifth-ranked Kentucky (20-3, 9-1 SEC) pushed its win streak to 10 games by beating South Carolina and Mississippi State . … Ninth-ranked Michigan State (19-5, 10-3 Big Ten) had lost three straight games before Saturday’s victory over Minnesota. … Markus Howard went for 38 points in No. 10 Marquette’s victory over No. 14 Villanova, marking his third 30-point output in four games. … No. 11 Virginia Tech (18-5, 7-4 ACC) was the only ranked team to suffer a two-loss week, falling to Louisville and Clemson while failing to reach 65 points each time with point guard Justin Robinson out indefinitely because of an injury.